The Boston Strikers Soccer Club was created to provide an opportunity for all to enjoy the sport of soccer. To this day, the club strives to offer players a safe space, free from discrimination, to make friendships through a sport we all love. The Boston Strikers Club fosters and encourages an interest in soccer among members of various skill levels by providing opportunities of education, instruction physical exercise, activities, games, and tournaments. To create a club such as this requires hard work, courage, dedication, and true love for soccer. We appreciate and recognize this as we reflect on the club’s history and celebrate its successes.

The Hall of Fame recognizes individuals or teams who have had a positive, long lasting impact on the Boston Strikers club; have made this club better because of their involvement; have increased the reach and exposure of the club; and have aided to the betterment of individuals and teams.

Hall of Fame inductees are decided upon by the members of the board in collaboration with existing Hall of Fame members. 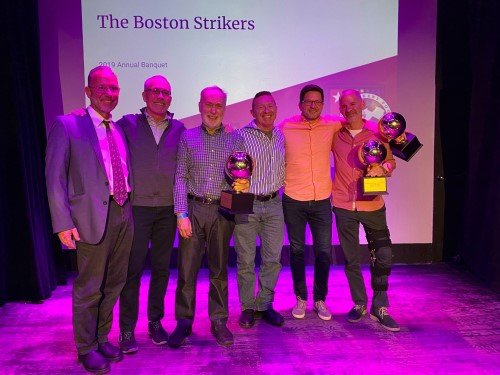 In 1987, on a cloudy day in May with the weather in the high 40s, a group of men gathered at Daisy Field in Jamaica Plain to host the first ever gay soccer practice in Boston.

At the time, the gay athletic community of Boston had just sent players off to the 2nd Gay Games in San Francisco, an effort led by Jeff Pike. Through the Gay Games advertisements, Jeff was contacted by Erik Andersen about the idea of a gay soccer team. Jeff and Erik saw an opportunity to form a club that was founded on the principles of inclusivity and respect for the contribution of athletes of all skill levels, and without internalized homophobia. The seven or eight individuals that joined together on that day in 1987 arrived having different levels of ability at soccer, but they came together over the ideas of friendship and community. And the idea of the Boston Strikers was born.

The Strikers owe their very existence to these original members, and have them to thank for everything that has come over the years. We are proud to make this group of players the initiating members of the Boston Strikers Hall of Fame, and thank them for their courage, inspiration, and vision.

Doug is a stalwart of the Boston Strikers, and he perfectly embodies what it means to be a Striker. He joined the Strikers briefly in 1994 before moving abroad, and then joined full time in 2000. His first days with the club were through Sunday practices, when he drove up from Providence every weekend. Doug recalls that the Strikers were a welcoming gay group for him and have provided a support system that has lasted through the years. In his time with the Strikers, Doug has served on the Strikers board for an incredible 14 years, including holding the treasurer position for over 10 of those years. He has represented the Strikers at seven IGLFA tournaments and two Gay Games, including winning a gold medal. Through his dedication to the club, he has sealed his legacy with the Strikers.

Doug has championed the club for many years and continues to contribute as a member. Nearly every Striker in recent memory can remember the way they have been warmly welcomed by Dougie when they first join the club. Doug's passion for the club, his positivity in every situation on and off the field, and his lasting impact on the Strikers make him a perfect inductee into the Hall of Fame.

Ed is a dedicated Striker that deserves a lot of credit for the rapid growth of the Strikers in recent years. He worked to make the Strikers formally a 501(c)(3) non-profit organization, an effort that finally culminated in 2019. This has made it possible for the Strikers to develop sponsorships with . For this all to happen, Ed spent countless hours compiling information, completing and submitting forms, responding to questions, and handling all of the processing with the state.

On the soccer pitch, Ed is a voice of positivity and encourages other players while giving the game his best effort with great attitude. He is truly enjoyable to play with - always encouraging, and always having fun. Ed's generous heart, positive attitude, and behind-the-scenes work to move this club forward make him a natural addition to the Hall of Fame.